Hello Everyone! Ready to start another week? Can you believe it's the last week of March already? Yikes! The way this year is flying by, I'll be needing Christmas cards sooner than I'd like to think. ;)

With that, I have made my first Christmas card for our Make It Monday link-up party. I used an image from our sponsor Rick St. Dennis. It's called Holiday Cottage Scene. He has a wide assortment of digis and I'm sure you would enjoy looking through all of them. 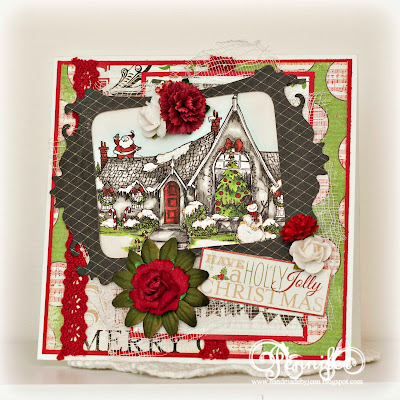 The paper is from Making Memories-found it at Big Lots on the cheap, so I'm pretty sure it's retired. The ribbon is Recollections and the flowers are a wide assortment. I added some stickles to make the snow sparkle, but it's not showing up very good in the picture.
Copics:
Gray: W5, 3, 00
Red: E19, 07
Green: G21, YG 03
Blue: B0000, 000

We'd love for you to join us! Remember, to be in the running to win the prize from our sponsor this week just leave a comment for another entry. Be sure to mention you saw them on Make It Monday. The more entries you comment on the more chances you have of winning!

A word from MIM and our sponsor:
Another new sponsor joins us this week!
We are so thrilled to welcome Rick St. Dennis to Make It Monday.
Rick St.Dennis Etsy Store 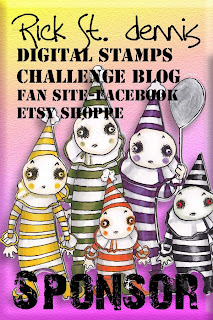 Rick St. Dennis' Blog
Rick St Dennis is a designer of over 100 theatrical productions and is also the author of 4 books on decorative painting and contributor to at least a dozen national magazines on crafts and art.
He is one of a handful of designers to have designed TWO productions of AIDA, Verdi's massive Egyptian opera spectacle.
Currently living in the quiet beach comminuity of Seal Beach, California he writes restaurant reviews and theatre reviews between assignments for web designs, logos and creating art for local shows.
St. Dennis has appeared on such TV shows as Home Matters with Susan Powell, Aileen's Crafts and others.
He was Crafts editor for Country Folk Art Magazine and sold his artwork nationally through galleries and shows.
Among numerous awards he won a presidential commendation in 1976 for his contributions to the bicentennial year including the design of the west coast premier of William Grant Still's opera BAYOU LEGEND.


Rick is generously offering our winner
2 Digi's
of their choice from his store. 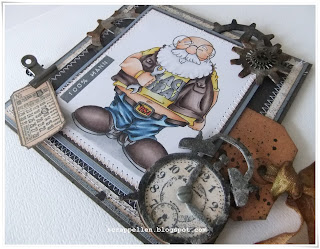 Go check her out!

Looks great! I do Christmas cards all year too...I think it is nice to have them done before the business of the season.

What a fabby xmas card ,love the colours and image you have chosen...
what a great POTW too.
tracey x

Your Christmas card is beautiful! Love the image you've used - I will certainly head over to have a closer look at what's on offer... I also like your choice of traditional Christmas colors, and the design is great!

What a gorgeous cottage Jenn, would love the have Christmas there,fabulous card, and your POTW is brilliant.

Such a gorgeosu card, Jen. I've chosen it as my DT favourite this week. :o) Happy Monday.
Sue x (MiniOwner@MIM38)

AGGGH! sorry I am so late with my visit here .
Stunning christmas card image and layout .
Awesome POTW too .

Wonderful Christmas card, not sure Father Christmas will fit down that chimney thought. Fabulous POTW, love that image, beautifully coloured too.
Hugs,
Sandy

I'm running around so much this week all I can see in front of me is my own behind!! So sorry to be so late coming to visit you!

Your card is beautiful Jenn, love the image. Your choice of papers is perfect. 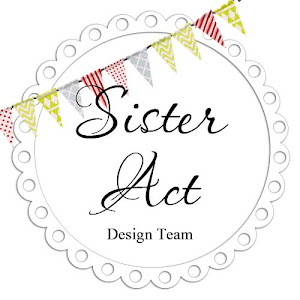 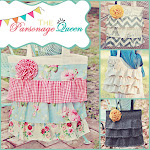